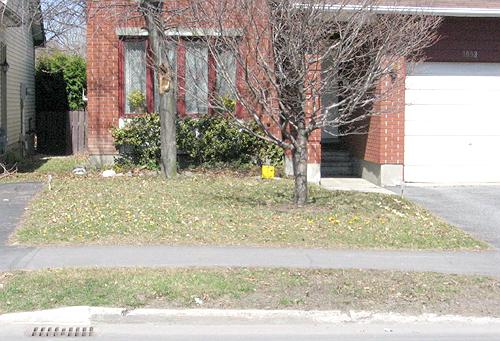 2005: Moving in date was just before the ground was frozen solid. Some crocus bulbs were quickly added to the front lawn and narcissus to the back. A few weeks later, a weak fork of the Prunus virginiana in the front snapped off in an ice storm, leaving a gaping wound and seriously weakening a second fork. The second fork was shortened by 1/3 to reduce stress on it. The tree lost almost half its leaf area. 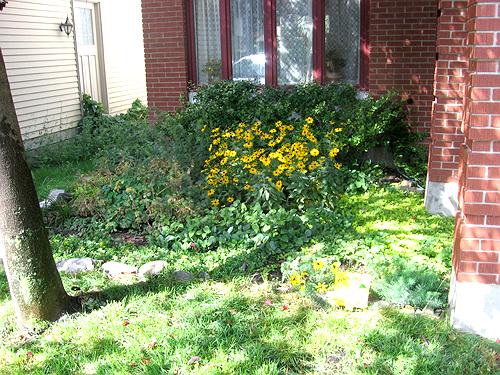 2006: Tree roots from the back third of the front lawn were cut off and dug out, which helped a bit to balance the damaged Prunus top with its roots, and experiments with plants started. A "free plants" sign and the offer of all the non-yellow flowers that appeared made friends with neighbouring gardeners and resulted in many plants in exchange. The frantic blast of water sprouts from the wounded tree were kept under control. A small preformed pond, several berry shrubs, and bird feeders were added to the rear yard to attract birds and small mammals. A compost bin was built. 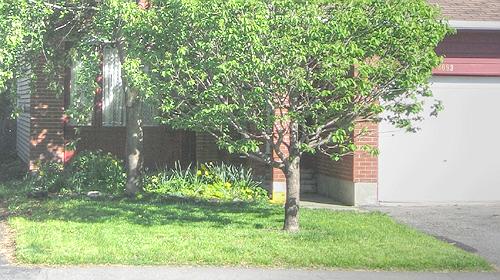 2007: More plants were introduced for trial. Repairs continued on the Prunus to nurse it back to health. 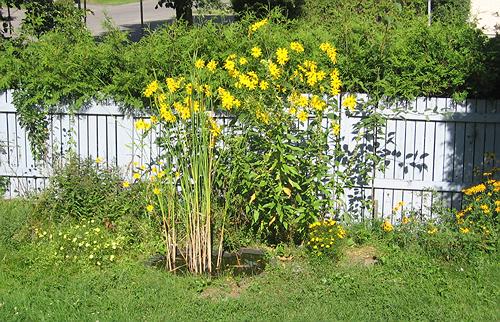 A meadow of native yellow-flowering plants was begun along the back fence. 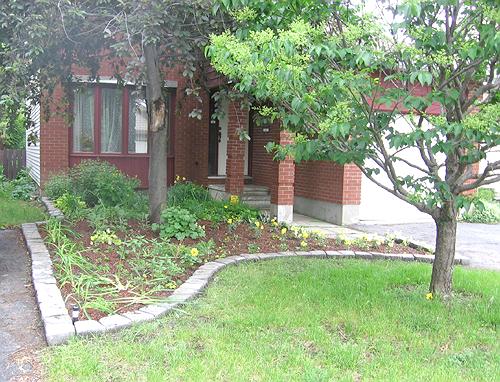 2008: I and the plants were settled in enough that the front garden was expanded to fill the middle third using material that had proven successful during the first two years. A low rock curb that matched the new interlock driveway was installed to give shape to it. A new garden was begun in a rear shady corner, and a roof-watered bog garden built under the cedar trees at the back with the help of son Arthur. A sprinkler system was added for use during Ottawa's usual extended summer drought. (It may be early or late, but we almost always get one.) 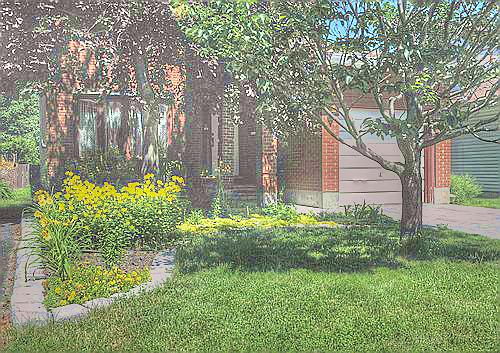 2009: Conversion of the back fence meadow to a garden was begun. Deep digging was the order of the day to get rid of Convolvulus arvensis roots that the previous owner had allowed to become endemic throughout the back yard. Part of a concrete patio was converted to an alpine garden, and another garden added on the east side of the house. The Syringa tree at the front lost half its branches over the winter, didn't produce any new shoots to replace lost branches, and dropped its leaves early. 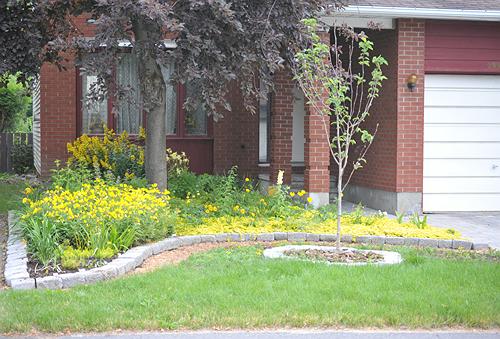 2010: Early spring, a Magnolia 'Yellow Bird' was installed in the front garden to replace the failed Syringa. During the summer, the rotting railway tie wall at the back was dug out and replaced by interlocked stone, non-toxic and permanent. The back fence was repaired with help from son Michael. After a lifetime of doing my own composting, I switched to the city's green bin program, making more space for flowers of course. Finally, the fence garden was structurally complete. Late fall, emboldened by the frequency with which I received compliments from neighbours while working in the garden, the remaining grass in the front (back of the sidewalk) was replaced by sedum, crocus and narcissi. 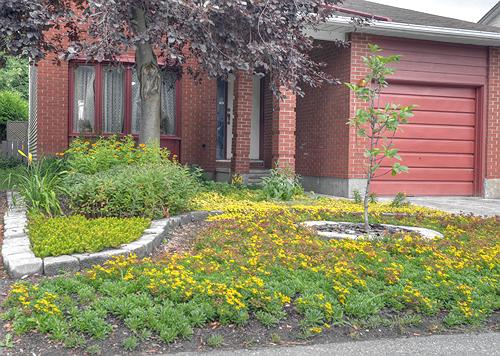 2011: The Magnolia 'Yellow Bird' died over the winter, and was replaced by a M.'Sunburst'. A height extension and vines were added to the top of the fence of the back shade garden for more privacy, the rear concrete patio was replaced with natural slate stone, and an Aquilegia garden built in the long-wasted area to the left of the rear stairs. Despite one of the cloudiest summers I can remember, percent sun contours were measured throughout the gardens. There were many more insect infestations this year than usual, in particular of Monostegia abdominalis larvae in the front garden. 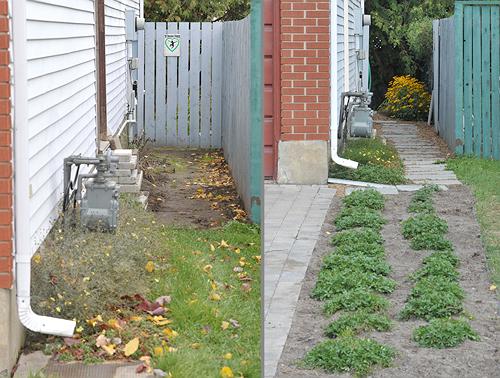 Limestone stepping stones were installed on the east side of the house and planting completed. 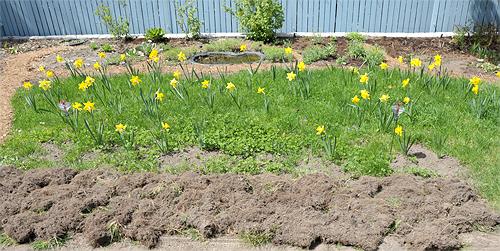 The last of the rear grass was replaced by a bulb garden and extended patio. In the front all that remains in grass is the salt-saturated patch between sidewalk and street, and I'm trying to establish Lotus corniculatus even there (despite the conditions being perfect for Plantago major).

2012: 45 days after the first crocus was in bloom, the hyacinths were covered in wet snow. They survived, so they'd belong here if they had stayed yellow. Unfortunately they got whiter each year, so I gave them away. (3 week gaps between the last and 2nd-to-last spring frost are common here; in 1957, the gap was over 4 weeks.) The weather upset Narcissus though, only 10% of them bloomed. That was followed by a hot 26 June-22 July with no rain whatsoever. (1995 was worse, and 1944 much worse; it too is part of weather here.) An insect survey was done in the back gardens. The growth in numbers of ichneumon wasps and other caterpillar and aphid predators was sufficient that the problem insects of last year were nearly absent this year. Hemerocallis 'Stella d'Oro' was divided and spread along the west side of the house. 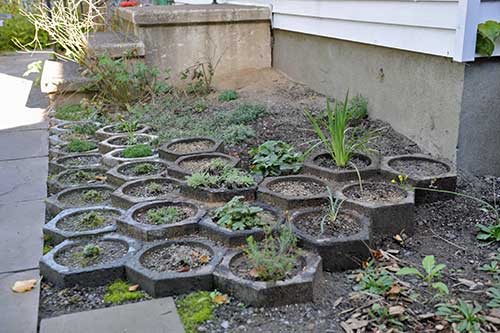 2013: A dozen different alpine plants were added to the gravel garden for trial, and experimental hexagonal hypertufa pots cast to show them off. The rear shade garden was disrupted by the addition of a new basement window. Half of the Sedum hybridum in the geophyte garden was replaced by Ranunculus repens cuttings. Due to poorer bloom than the Forsythia 'Northern Gold', the F.'Ottawa' was donated to another gardener.

2014: The winter was harsh (-37C) and a dozen plants were lost. The magnolia was removed after its infestation of scale proved impossible to handle. The first winter's survivors of hexagonal pots and a second year's production were installed and the surviving alpines planted in them, also some new ones. Parthenocissus tricuspidata 'Vetchii' was added to the west wall as an experiment. The chokecherry showed clear signs of black knot fungus (Apiosporina morbosa), which means that a replacement must be planned for. 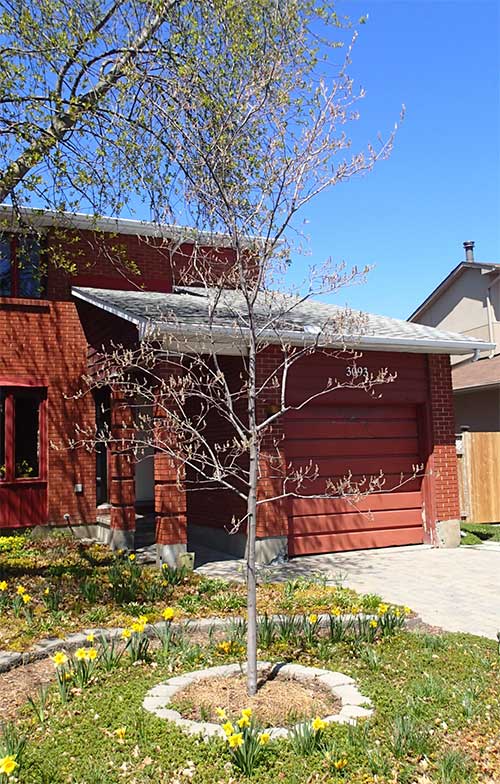 2015: The frost penetration was much deeper than usual, freezing hundreds of pipes throughout Ottawa, almost wiping out local ground nesting bees and small Hymenoptera, and almost killing the Parthenocissus tricuspidata 'Robusta'. An Amelanchier alnifolia was added to the front to become a replacement for the chokecherry. 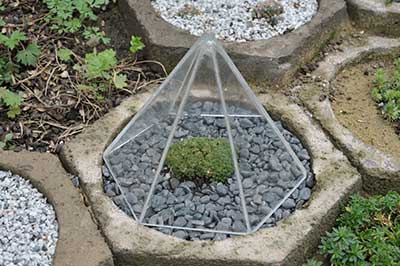 2016: The winter wiped out all the Aquilegia so it had to come up from seed, and set back the Lilium, but other plants thrived to compensate. The Forsythia 'Northern Gold' was donated to another gardener since it grew too large and untidy for the site; a few Hemerocallis were donated to our first neighbourhood Free Plant Exchange to focus on the happiest ones. The alpine pots were completed along with trial acrylic tents for alpines that easily rot under snow, and experiments started there with hardy cacti.

2017: Something, probably a cottontail, ate the bottom half-meter of every one of the Parthenocissus over the winter. With TLC they're recovering, but herbivore guards are going to be needed from now on.

2018: This was a terrible winter for losses: half the alpines, several Lilium, the Eremurus... But worst of all, every scrap of the Parthenocissus above ground was killed, and my treasured 'Robusta' lost totally. 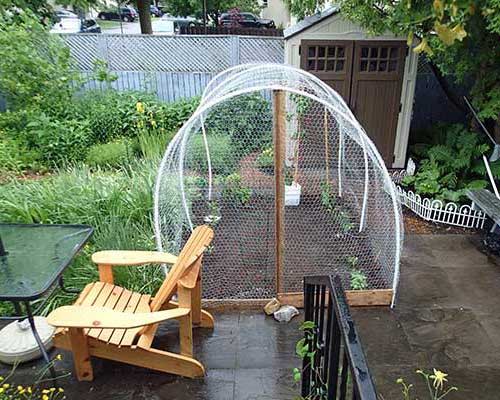 2019: Marriage in March resulted in the appearance of non-yellow flowers, and a rodent-protected vegetable/fruit garden and storage shed being added to the back garden. Half the space in the protected garden is for hardy self-fertile berry shrubs and grape vines, the rest for herbs and annual veggies.

2020: First crops were obtained from several of the berry shrubs and one grape vine. 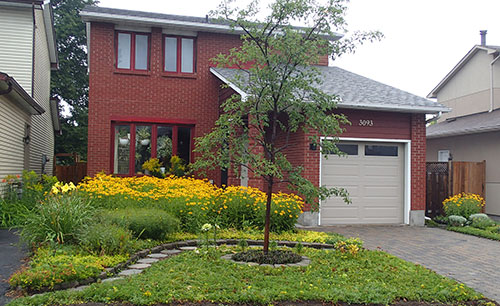 2021: The chokecherry reached the end of its life and was removed. The stump will be used for ivy in a decorative pot. The front garden was awarded a city-wide prize. 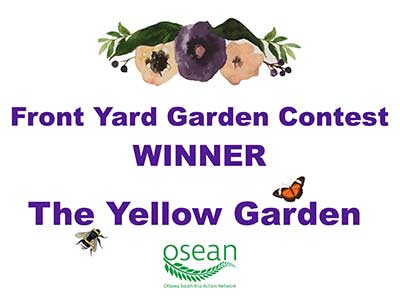 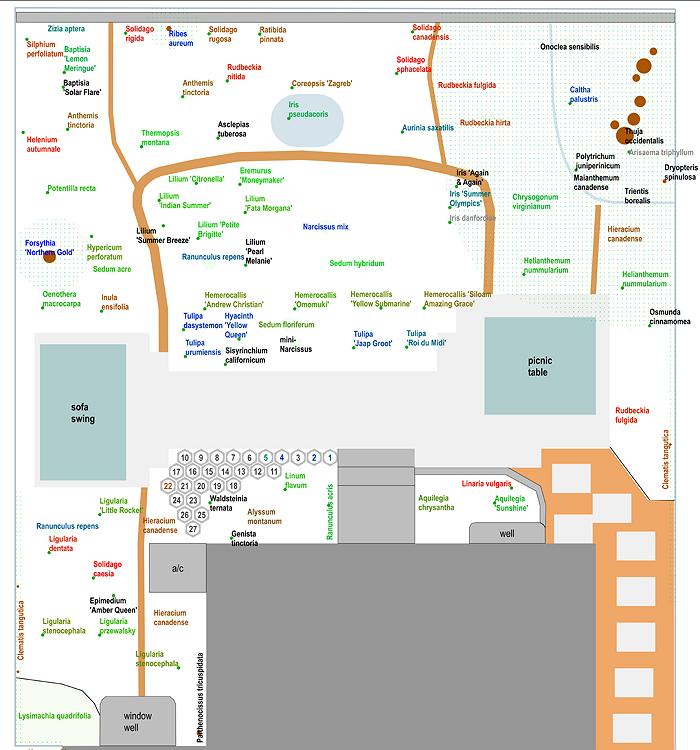 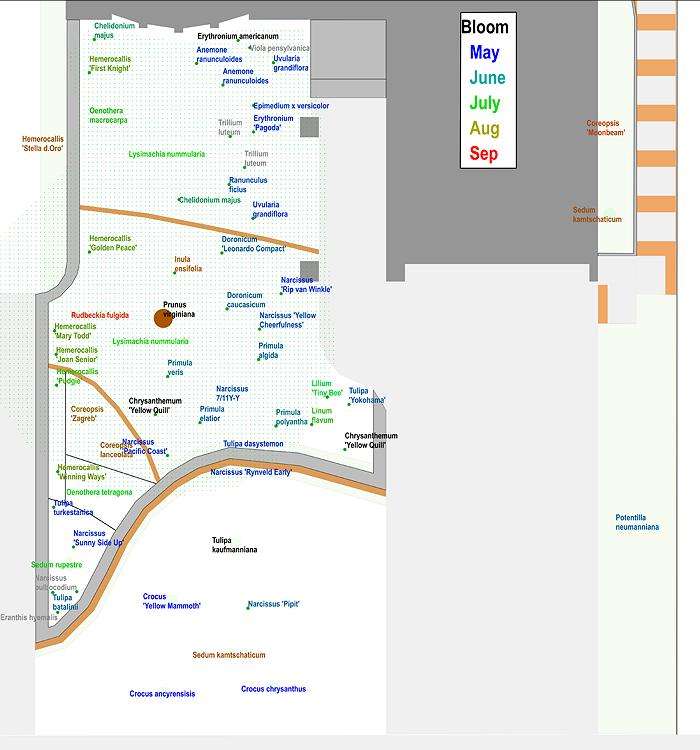 Most people don't like to admit failures, but scientists like me know that hearing of failures can be every bit as important as hearing of successes.

Every nursery wants "well drained rich loam" for their plants! However, Googling the botanic name with "soil", "prefer" and "native habitat" increasingly gets a lot of useful information on the growing preferences and requirements of plants.

Here are the plants that seem to have failed for me primarily due to root rot or unhappiness with the soil. Many were donated by neighbours who have sandy loam with no excess magnesium: Alcea rugosa, Clintonia borealis (the bog), Cypripedium parviflorum (may have been crown rot), Erysimum cheiri, Lupinus 'Gallery Yellow', Stylophorum diphyllum, three Trollius species, Tussilago farfara.

Rain water is normally acidic due to carbon dioxide dissolved from the atmosphere (Ottawa rain averages pH 5.6) and plant leaves are adapted to such water. Our tap water, although almost as pure as rain water (typically 50 ppm dissolved solids), has its pH raised above 9 with sodium carbonate to reduce corrosion of lead water pipes in apartment buildings and 100-year-old iron city water mains. Plant leaves are not adapted to such alkalinity, and some have severe problems with it. Some of the plants above may have been fatally damaged during times when sprinklers were needed, before I understood this factor.

Helianthus tuberosus proved too invasive. It has great blooms, but it flopped over in the low light of the east side, the only contained bed available; a trial with a 60 l pot in sun resulted in a pot so full of roots that the plants were too stunted to bloom. Rudbeckia laciniata and Centaurea macrocephala were too tall and had too few and small flowers to be worth the space. Geum 'Lady Stratheden' and Echinacia paradoxa had stems far too weak for their blooms. Hyacinth 'City of Haarlem' and 'Yellow Queen' started off yellow but after several years were coming up white instead.

As with all weeks on my site, these are natural weeks, starting 22 December.

The area used to be a motorcycle racetrack with a stone surface; it was covered over with 20 cm of so-so soil when the house was built. At first I thought the added soil was clay, it was so clumpy, water-retentive and hard to dig. But, when a soil texture check (at right) indicated it was loam, I got a lab test. Loam it is, but previous owners had grossly overused dolomitic limestone, high in water-clumping and phosphate-bonding magnesium. The problem has been corrected by lowering pH to leach out excess magnesium, and by the addition of calcium (bone meal) to counterbalance the remaining magnesium's effect on soil structure.

Soil management is zero tillage except for weeding and transplanting. Plant materials, including tree leaves, flower petals etc., are left in place except as required to avoid disease. Natural processes (including our non-native earthworms, which are plentiful) are relied on to transport organic matter, phosphorus and sulphur throughout the growing layer.

One top Ottawa grower uses 50% potting soil, 40% Turface, 10% coarse sand; another 50% Qualisorb, 50% topsoil; both mixes have high water retention. On the web: Hubert Conlon (Cornell Cooperative Extension): 1 part garden soil, 1 part sand and 1 part peat moss; Donna Kuroda (National Capital Cactus and Succulent Society): 1 part potting soil, 1 part perlite; World of Succulents: 2 parts topsoil, 2 parts peat moss, 1 part coarse sand, 1 part perlite or crushed charcoal, 2 oz limestone & 2 oz bonemeal per 15 l of mix. Most on the web agree that soil should fall apart after you wet it and give it a squeeze, or that water should drain through pot in 15 s; most also agree that slightly acidic pH is best, but that some lime is needed. A few growers even treat succulents as epiphytes and pot in zero-soil zero-peat-moss bark mixes, but they are a small minority. The gap between local growers and the more southern growers with sites on the web is remarkable.

After many experiments, I'm finding excellent success with 100% Turface, enlarging the bottom holes of pots to 1 cm (with a diamond hole-drill) and adding bottom pads/legs to the pots so the Turface is well ventilated through the hole. Once a week bottom soak until the Turface wets just to the surface then drain. I've typically 40% sun at a window and indoor humidity 50-60%.

These are the wild creatures who have found shelter, food or water here so far (not just flown overhead):